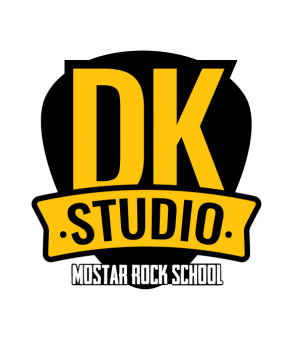 Purpose of DK studio is primarily educational. It is the space where Rock school students have a possibility to gain experience in the recording of their instruments/vocals. It is also a space for training and practice of future recorders, producers and studio technicians.

Purpose of DK studio is primarily educational. It is the space where Rock school students have a possibility to gain experience in the recording of their instruments/vocals. It is also a space for training and practice of future recorders, producers and studio technicians.

In addition, DK studio is open to other musicians as well and can respond to more demanding recording projects. Although situated in a somewhat smaller space, DK studio has two separate premises: Control room 10m2 and Live room 27m2.

DK Studio guarantees dedication and excellent service to all who decide to record in our studio.

We want to emphasize that by recording in DK studio, you directly contribute to the development of Mostar Rock School.

Stereo live – suitable for bands that want to record their rehearsals with better quality for the purpose of latter analysis and possible rearrangements of their own works.

Live In – suitable for bands that want to record their live performance using multi-channel recording. This kind of recording opens the possibility for further corrections and overdubbing.

One by One – each instrument is recorded separately resulting in clean signal and sound. This is the proper way to record for those who want to get maximum of their material during the production.

Recording is one of the basic things that a musician does; it is the way to leave a mark. Troughout one school program year, as a part of Session band program, Mostar Rock School students create over 50 – 70 original songs. Former capacity allowed us to record only 10% of these works. In wish and with aim to increase this percentage, as well as to create platform for further development of music cooperation and ideas, the idea about organizing big benefit event that would lead to the establishment of our own Recording studio arose.

Initial support was provided by band Dubioza Kolektiv and Red Bull, and then OSCE as well, and big open- air event was organized on December 30th 2015 at SC Kantarevac in Mostar. At this full-evening event, Mostar Rock School presented five of its bands and musical projects, band Floridus that was formed in the school and now pursuing their career, and finally Dubioza Kolektiv who played a full-concert. Even though the concert was open-air and in spite of the very low temperatures, this pre-New Year’s Eve celebration packed Kantarevac with audiences ensuring the initiation of DK studio.

We are grateful for the great support of everyone involved, making the road from an idea to the establishment of the DK studio lasting only four months. Special thanks go to band Dubioza Kolektiv, and therefrom the symbolic name - DK Studio.